The fifty-six miles of the Farmington Canal Heritage Trail (FCHT) and the eighteen miles of the Farmington River Trail constitute the most picturesque and historic greenways in New England. The Connecticut section from New Haven to Suffield runs through eleven towns and connects with many more biking and walking trails. The FCHT has been designated a Community Millennium Trail under the federal Millennium Trails Initiative based upon its special value to the communities it serves.

President Thomas Jefferson knew that to bind the fledgling country together a dependable national transportation system was needed.  The country had doubled in size with the Louisiana Purchase in 1804. With this in mind, he turned to his Treasury Secretary Albert Gallatin and asked him to develop a plan that would connect east coast ports with farmers and merchants west of the Appalachians.  Soon Gallatin presented a plan consisting of a cohesive system of waterborne transportation and turnpikes and the “canal craze” began.  Throughout the United States, from Cleveland to Akron, from Richmond to the Blue Ridge Mountains, from Albany to Buffalo, canals with their sophisticated lock systems were being constructed in order to facilitate trade between the interior of the United States and its coastal ports.

Encouraged by the success of the 363-mile Erie Canal and looking for ways to more effectively compete with the port of Hartford, a group of New Haven businessmen met to discuss the idea of a canal route from New Haven to the Massachusetts border and beyond.  Led by New Haven lawyer, James Hillhouse, representatives from seventeen towns met in Farmington, CT in January 1822 and persuaded the legislature to issue a charter for the formation of the Farmington Canal Company.  At about the same time the Hampshire and Hampden Canal Company was formed in Massachusetts to extend the canal from Southwick, MA north to the Connecticut River in Northampton.

On July 4, 1825, ground-breaking ceremonies were held at Salmon Brook Village in Granby, CT. Governor Oliver Wolcott had the honor of turning the first shovelful of dirt.  The shovel broke – an ominous sign of things to come.

The Canal Corporation was beset by problems at the outset.  Chronically under-capitalized and receiving no financial support from the State of Connecticut, the Corporation was forced to employ construction shortcuts with the predictably disastrous results.  The canal leaked at many points, the banks collapsed and aqueducts were washed away.  In addition, farmers, unhappy that the canal encroached on their land, sabotaged the work.

Nevertheless, the company persevered and in 1828 the first commercial canal boat, the James Hillhouse, left New Haven bound for Simsbury, CT.  In 1835, the canal was finally completed from New Haven to Northampton, a distance of 84 miles.  A series of 28 locks in Connecticut provided a drop of 220 feet from the Massachusetts border to New Haven.  On average the Farmington Canal was 36 feet wide and four feet deep with a 10 foot wide towpath.  The canal boats themselves were 85 feet long and were pulled along by horses or mules.   During its heyday the canal carried a variety of cargo through the Farmington Valley, but was never able to turn a profit.  Bowing to the inevitable, the shareholders of the Farmington Canal Co. petitioned the legislature for authority to build a railroad.  In 1848 commercial operations on the Canal ceased.

While many factors led to the demise of the Farmington Canal, none was more important than the invention of the steam engine.  In 1831, an English-built locomotive named the John Bull established once and for all that the steam engine would provide the next enduring development in the transportation evolution.  By the mid-1800’s, more than one hundred separate railroad companies operated in Connecticut.  The New Haven and Northampton Railroad Co. was chartered in 1846.  Dubbed the “Canal Line,” the first section from New Haven to Plainville was completed in 1847, mostly along the route of the canal.  By 1850 the line had been completed from Plainville to the Massachusetts border with branches out to Tariffville, Unionville and Collinsville.  By the late 1800s, the small private lines were merging with larger companies.  In 1872, the Canal Line was consolidated with the New York, New Haven & Hartford Railroad.  The New York, New Haven & Hartford operated until 1969 when it was consolidated with the Penn Central.

In 1869 another railroad broke ground in Winsted, CT.  The Central New England Railroad, as it came to be known, ran in an easterly to westerly direction.  In a concession to Avon Mountain however, the line ran from Hartford north to Tariffville then turned south through West Simsbury and Stratton Brook to Collinsville where it turned northwest for its run out to Winsted and Lakeville.

Over the years the railroad operated under many names, most notably the New York, New Haven & Hartford.

Just as surely as the locomotive replaced the canal boat, trucks and automobiles increasingly took over freight and passenger service and rail service over most of the Canal Line and Central New England ended by the late 1980s. As rail lines around the country fell into disrepair groups of creative individuals explored the idea of converting abandoned rail beds and canal towpath into recreational trail and the “rails-to-trails” movement was born. In 1984, trail advocates began to get more organized, and the Rails-to-Trails Conservancy was formed.

In 1987, the Interstate Commerce Commission was ready to permit abandonment and sale of the old Canal Line to private developers, when a group of individuals from Hamden and Cheshire successfully petitioned to allow the right-of-way to be rebuilt as a recreational trail. The Farmington Canal Rail-to-Trail Association (FCRTTA) was born from this core of volunteers.

The first six miles of trail were opened in 1996. In a few areas, the imprint of the original canal can still be seen, along with retaining walls, canal locks and other features. In Cheshire, the only restored lock along the original canal has been incorporated into the Lock 12 Historical park, which comprises a small museum, as well as blacksmith and carpenter shops, lockkeepers house, and a picnic area.

The remaining part of New Haven from Yale University to Long Wharf is in construction and due to be completed in 2023.

Congress provided funding through the Transportation Enhancement (TE) portion of the Intermodal Surface Transportation Efficiency Act of 1991 (ISTEA) and the FVTC was formed soon after in 1992 by Preston Reed and other concerned citizens to promote and support the conversion. Six town governments and staff cooperated in the creation of the trail development committee and in providing the 20% matching funds not supplied by ISTEA. The first sections of the “Farmington Valley Greenway” were paved in Simsbury and Farmington beginning in 1993/4.

Much of the trail system is complete with the exception of a 7.3-mile piece running south from Northwest Drive in Plainville, through the whole town into northern Southington. This entire section is either in construction or design and is fully funded through CTDOT.

The maps included on this website cover the 56.5 miles of the Connecticut section of the FCHT from New Haven to Suffield. The FRT loop trail runs from Unionville along the beautiful Farmington River, reconnecting with the FCHT in Simsbury. 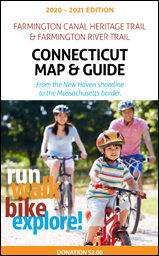